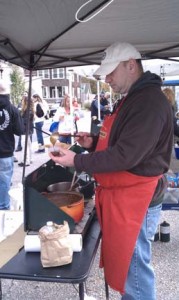 I decided to enter the local Maryland chili competition, Mason-Dixon Chili Pod / CASI, which is part of the CASI (Chili Appreciation Society International). It was a worthy cause as well a challenge, as all proceeds were donated to charity.

My dad always makes the best chili and when I asked him for a recipe years ago he said I should just watch and take notes. I did and that’s when I learned you need to taste and adjust. He used McCormick’s to start and added extra paprika, cumin, garlic, and oregano to it in varying amounts. I opted to concoct my own chili powder.

A little research revealed that paprika actually means “ground pepper” in Hungarian, Serbo-Croation, and other Slavic languages. Thus enlightened, I was inspired to make my own paprika for my chili powder.

The competition rules: Bean there, none of that!

1) Everything has to be prepared and cooked on-premises. Basically a propane camping stove.
2) No beans or any fillers. There’s something like 250 types of beans and they want the judging to be about the meat and the sauce.

3) No visible vegetables or anything else. It’s a blind judging so no identifying features. That means puree them or do what I do, cook them in the stock.

There were more rules, but these are the main ones worth noting.

Rule number 1: I might have cheated the first time since I roasted assorted peppers, garlic and onions the night before and used them to flavor my stock at the competition. But at my second competition, I observed the proper rules by sauteing them on site. And of course, I wonder if roasting and grinding peppers to make my own chili powder is cheating. I’ll check the rules again.

My first cook-off was at Behnke Nurseries in Beltsville, MD. It’s a great nursery, and I’d get all my plants and seeds there if it wasn’t a 1 1/2 drive away.

Since I arrived, late I set up way in the back–far back enough, it turned out, to miss being checked by the Board of Health– but not by a steady stream of customers, who said they were told to “find the guy in the back.” Half my visitors said it was by far the best-tasting, which was gratifying, but the other half seemed impressed with the fact I was the only contestant using cubes of beef (I used chuck). I later learned that they don’t use cubes in competition anymore only chili grind which is a courser grind than normal.

I used a little black pepper (no white) and a lot of roasted fresh pepper for the slow burn in the back. This lets the heat approach threateningly slowly but never land the painful bite. The odd thing about that, I took a long red pepper and cut off the bottom and gave it a lick and it was not hot. I cut the rest of the pepper and tasted a bit near the top and the pain was way too much for someone new to the hot pepper appreciation club.

I noticed that when I put the roasted hot peppers in the stock the stock would get fiery hot for awhile and then cool down. I need to experiment more with the disappearing heat. I also noticed chili’s taste changes often and it takes awhile for the flavors to settle. This causes many chefs to over-season. One of the guidelines I often see for competition chili is to stop messing with it. You will end up ruining it.

So the nursery had a nice steady crowd and a lot of repeat samples. Sample cups are two-ounce souffle cups. The competition chili can be different from what they call the throw down, or what is served for the taster choice. The way it works is people pay $5 and get five sampler cups and a ticket to give to the maker of their favorite chili. That money goes to the charity chosen for the event. I found out later that you are allowed to put beans and vegetables in the throw-down to stretch it out.

For my first competition, I brought three pounds of meat and that lasted from 12 pm to 2 pm. So the last hour I had nothing to give out. For my second, I brought eight pounds and beans but still ran out an hour early.

The second cook-off was at the Maritime Republic of Eastport (MRE) for the 13th annual “Slaughter Across the Water”. It was crowded, as the tug-of-war sure pulled in a big crowd of people.

We had a lot of fun, and many folks asked where they can buy my chili or at least the powder (rest assured, having worked in the past for companies like eBay, I’ll be working on that). My daughter spent most of the day selling tickets for the tasting while advertising the face painting at the festival. My wife helped cook a batch of chili and dished most of it out. The crowd loved them both.

The cooking
I start out cooking my stock, which is a mix of beef and chicken stock that’s both store-bought or a mixture of water and base. I sautee my onions, carrots, celery, garlic, peppers, and cilantro. I’ve been using 1 Italian long hot, 1 cherry pepper, 1 Hungarian green, 1 serrano, and 2 jalapenos. But I change this panoply of peppers depending on what’s available.

I throw them in the stock and cook for at least an hour. While that’s going, I start cooking some bacon. I always keep extra bacon fat in the freezer for home fries or chili. But for competitions, you need to cook it there. I then add meat and start browning it.

After straining gently, add canned tomato sauce, a few spoons of chili powder, and some strained stock. Let that cook awhile and stir a few times but not too often. I use a splash screen to cover that allows it time to reduce and ensures nothing goes in my chili unless I put it there. For my first competition, I used a ricer to puree the vegetables instead of throwing them away but that was messy. Now that I know I can use them for the throw-down that’s where they’ll be.

Wait an hour or so and add more stock and more chili powder.
Now is when you adjust the taste by adding more garlic powder, onion powder, and oregano. This is when I also add tomato powder and some chipotle powder.

From nasty to tasty

At this point, the taste can only be described as nasty. I wait half an hour for the taste to settle so I can gently fine-tune the seasoning. I also add a teaspoon or tablespoon of brown sugar to take the edge of the tomato taste. If it still needs salt I might just reduce the stock more or add salt. I only needed to add salt for the second competition.

About half an hour before serving, I toast the cumin in a pan and crush them with the mortar and pestle. Add that and then it’s hands-off, except for the heat. Depending on the peppers used, there should be a nice background heat. You might want to kick it up a notch but don’t make it burn. People aren’t expecting pain. I add a bit of Sriracha, some fresh ground black pepper. I have since learned that white pepper is often used because it lights up the entire mouth but doesn’t give you the 3rd-degree burn.

For both competitions, I won People’s Choice awards by an overwhelming majority, but the judges saw things a bit differently. In my first competition, I was in a three-way tie for 11th place; hardly exemplary in a field of fifteen. But in my second go-round, I landed in 2nd place out of 13. Much better, but there’s still the first place to shoot for.