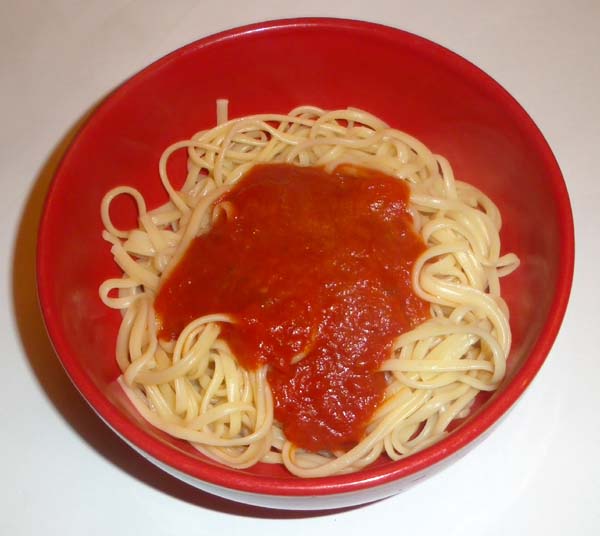 I recently started watching the cooking shows and it seems most want you to salt your water to taste like the sea; stating if you water tastes like nothing, your pasta will taste like nothing. I’m sure you don’t have to be from Long Island to know that when you get a mouthful of sea water you spit it out. So, I don’t want my pasta to taste like something I will spit out.

Salt brings out the flavor of food; it is not the star except for maybe a pretzel. Oddly enough, even pretzels have most of the salt on the outside, not throughout. If pasta was meant to be salty we would add more before rolling it out. The same applies to bread. We top pretzels and bagels with salt rather than adding it in. If we want a bowl of pasta with just salt we can add it to the finished product, which was often my only option during the college years.

So the pasta should be the base that is flavored with our sauce. I often hear the claim that Italians use parmesan cheese as the “salt” (or brings out the flavors) in pasta dishes. So don’t ruin it by over salting your water.

Salting the water and why.
Adding salt to water allows it to boil at a slightly higher temperature, around 216 F. That will speed up the cooking time a small bit. Someone should do a test and post the results. It helps to add the salt after the water is already hot so the salt doesn’t cause little pit marks in the pot. You will notice if you add salt to boiling water it stops boiling, proof that it requires a higher temperature to boil.

Filtered Water
If you filter water to drink than you should filter the water you cook with. Whatever flavors you filter out of your drinking water will end up in you pasta so if you enjoy drinking water from the tap then use that.

Oil in the water
When you boil a pot of pasta it bubbles, foams and splashes. A small splash of oil, tbs or less, will prevent it from foaming over and keep a neat boil.
General Chemistry Online
Many people think that the oil is to prevent sticking, not so. Only stirring immediately will prevent sticking. Once enough of the starch outer layer is cooked you don’t need to stir, the boil keeps the pasta moving. So the first couple of minutes stir it a few times.

I also hear the claim that the oil prevents the sauce from sticking. If you strain the pasta into a colander, the oil is the first thing that hits the drain. If you have a colander built into the pot and pull the pasta up and out of the water, than yes it will cover your pasta. This is the same principle for boiling vegetables. When veggies are boiled, many of the vitamins are released into the water and captured in the oil or butter floating on top. So when straining vegetables, always lift them up through the oil rather than pouring the vitamin rich oil down the drain. That said if you plan on pulling pasta through the oil and don’t mind a foamy boil than just skip the oil. No big deal. So use the cheap oil for the pasta boil.

Storing or using right away.
If you are making pasta ahead, you need to quickly shock it in ice cold water to stop it from cooking and strain it again as soon as it cools. Even when cold, pasta will absorb water. In the restaurants we would shock, strain and coat with oil to stop it from sticking. We then submerge it in simmering water for a minute or less to heat and remove the oil. Sauce will then stick just fine.

Some people rinse the pasta when first cooked to remove the extra starch but don’t let an Italian see you do it. I once had a boss that used to curse me for letting all the “beautiful pasta gravy” flow down the drain by straining the freshly cooked pasta into a bowl with holes in it. Saving it and adding a bit to your sauce when you need water is a good idea.

Boil water. Add salt and oil and allow water to return to boil. Add pasta and stir immediately. Stir a couple more times in the first three minutes and then on occasion after. Pull out a piece, let cool a few seconds and then bite into it to test for doneness. A little resistance to the bite but still cooked through out. When done, strain immediately.
Cooking time: Around 3 mins for fresh and 8 mins for dried. Times vary depending on thickness.